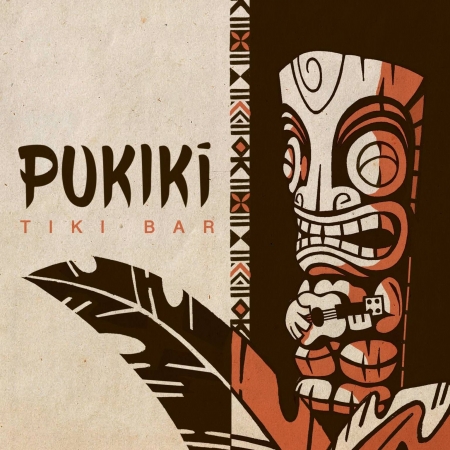 Continuing the #rumfamily series with an interview from Pukiki Tiki bar owners Carla & Martin. Recently we visited Madeira and enjoyed quite a few evenings at Pukiki Tiki Bar. We instantly felt at home and loved chatting with them,  whilst enjoying some awesome cocktails and Rums.

For those that don’t know you could you give a brief history of your Rum journey so far.
Aloha. We’re Carla and Martin, owners of Pukiki Tiki Bar in Madeira island. We first got into Rum back in 2008 when the first Tiki bar opened in Manchester around the corner from where we were living. We had always been into 50s Americana and Tiki but we didn’t know much about Rum. A few bars in Manchester started doing monthly Rum tastings and that’s where our interest began. We then started going to the UK Rum festival, and Rum festivals in Europe and our passion grew from there.

What made you decide to open a Rum bar?
We never had any plans to open a Rum bar. The whole thing came about by chance. We were living in the UK but had, had enough of city living (and rain) and wanted to move to Madeira where Carla is from. Her mum found a little house for sale that used to be a tavern and shop in the 1950s. We saw an opportunity to move to Madeira and create an income, so we just decided to go for it and bought the house without seeing it in person! It ended up being a much bigger project than anticipated. We did the renovation ourselves to save money and had to learn a lot of new skills as we went along. This also goes for the bar which is a complete new challenge for us coming from a design background.

Please could you tell everyone a little bit about your bar?
Pukiki is a small and intimate Tiki bar specialising in Rum. We are located in the countryside in Madeira, 30 minutes from the city. What makes our bar different is that Pukiki celebrates a real connection between Madeira and Hawaii. Pukiki means Portuguese in the Hawaiian language and our bar celebrates the fact that lots of Madeiran immigrants went to Hawaii in the late 1800s to work in sugar cane plantations. This voyage led to the invention of the ukulele which originated in Madeira. We designed our bar keeping as many original traditional Madeiran features from when it used to be open as a local tavern. We combined this with Polynesian touches as we wanted it to feel as if a Pukiki had moved to Hawaii and returned to Madeira to open a bar with Hawaiian influences . We live above the bar so when people visit it really feels like we are inviting guests into our home not just a commercial bar and we aim to give a more personal experience. We serve Rum based Tiki and classic cocktails and we have the largest selection of Rum on the island, including the local Agricole Rum produced on Madeira which we also use in our cocktails.

How do you design your cocktail/drinks menu?
As graphic designers, we spent a lot of time in the UK working with Tiki bars and bartenders to create their menus from a visual point of view. We learnt a lot about Rum, cocktails and flavour combinations from the bartenders we worked with. Our menu has a combination of classic Tiki and tropical cocktails along with our own creations. The availability of some Rums and liqueurs is limited on a small island so we have to be a bit creative and we also make our own syrups.

What is the best selling cocktail on your current menu?
Our best seller is probably our twist on the Missionary’s Downfall. We serve it as a long drink and use local Agricole Rum which makes it very refreshing on a hot Madeira day.

How has the Rum industry changed whilst you have been involved in it?
The industry has changed a lot since we first got into Rum back in 2008 and it is growing quickly in popularity. In Madeira, 8 years ago, the only rums available were Captain Morgan, Bacardi and Havana Club. Importing Rums to the island is not an easy task. We have to go through distributors and being a small bar means we have to be very persistent and patient as it takes a long time. We now have over 130 Rums on our back bar which is not much compared to most Tiki bars but for a small island this is a lot. The biggest change we have seen is with Madeiran Agricole Rum. In the past, the vast majority of Rum produced on the island was unaged white Rum used for the local drink ‘Poncha’, with only a tiny proportion being aged in barrels. In the last 10 years the local distilleries have invested in ageing Rum and have started to experiment with different casks. Production of Madeiran Rum is very small in a global context but now that it is becoming more available in Europe it is sure to grow.

What is the most challenging thing about owning a bar?
Most people who don’t work in the industry do not realise how much work is involved in running a bar, especially a Tiki bar. We are living the dream by owning a Rum bar on a tropical island but we have to work for that dream. Day to day cleaning, making syrups, buying stock, maintaining gardens and bar prep all take time. Along with lots of late nights this can be exhausting but we love what we do and what we have created.

What is the most rewarding thing about owning a bar?
Definitely the customer experience. We really enjoy speaking to customers and meeting new people from around the world. We love telling the story of Pukiki. We have repeat customers who come to Madeira every year along with local regulars and we have made lots of friends in the bar.

In today’s climate where we are trying to reduce waste can you suggest ways in which bars can do this?
The first thing we did was to get a compost bin to help deal with fruit waste. We are also experimenting with Bokashi fermentation to deal with citrus waste. We are able to use the compost we get from these two methods in our herb and mint garden. We reuse as much fruit as possible for garnish. We made the switch to bamboo straws which are reusable and in terms of shopping we have reusable bags for fruit. Our next step is to get solar hot water and electricity to take advantage of the sunny climate in Madeira.

What is your proudest achievement so far?
Our proudest achievement is being able to share the cultural connection between Madeira and Hawaii. Since we opened we have had lots of Pukiki visit us such as Kumu Paul Neves from Hawaii, descendent of Madeiran immigrants. He was able to share the aloha spirit by hosting a series of Hawaiian workshops where he talked about Hawaiian tradition and culture and taught Hula to the the guests on our terrace. This is something that we would love to develop in the future. We are also proud to have on display in the bar the only original ukulele made by the Madeiran inventor Manuel Nunes. It is the only one to have found its way back home to Madeira. We love to talk history and culture over a cocktail and we feel we have created something that is more than a bar.

Do you have any Predictions for the future of rum?
We see Rum as being the next big trend in bars. Agricole Rum is a growing market as people’s palates develop. Rum is a very versatile spirit and we think there is a Rum out there for every taste.

This error message is only visible to WordPress admins