The #rumfamily series turns it’s attention to those that are at the heart of the category. They are of course the distillers that take the raw materials and produce the magical liquid we all love so much! First up is the Foursquare master distiller, Richard Seale, who produces truly exceptional Rums from Barbados.

Please tell us a little bit about yourself and your journey to where you are now as a distiller?
I officially joined the family business in 1993. Of course I had worked there every Christmas and Summer Holiday. It was always the case that I would join the business but not necessarily to work directly in rum. Our origins are as a merchant trader in Roebuck Street who bought rum from the distilleries and then blended and bottled under our name as well as trading other provisions. What changed dramatically is that in 1993, we acquired the Doorly’s brand, a very prestigious and historic Barbados Rum brand. This certainly crystallised a change in our outlook. We realised we had to build stocks enter the export market and the only way to do this was to distill our own. 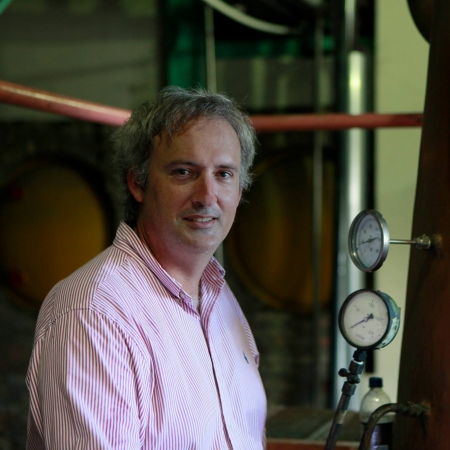 My father had actually tried to buy an existing distillery in 1991 with a similar vision in mind but it did not work out and by this time I gave my father the confidence that it would be best done on our own. My father lives next to Foursquare and we had known this estate very well from its sugar factory days. As a boy, I would go through the factory yard as a shortcut home. Everything that had made it a great site for a boiling house and still house in 1730 still applied in 1994. You might say it was destiny.

What do you know now that you wish you knew at the start of that journey?
I think to have the confidence to sell the Rum we wanted to sell or rather the Rum we should be selling. That is to say the Rum at the top end of the market. At the beginning it was easy to listen to the buyers that Rum needed to be cheap and low quality. It was very easy to believe that Rum had to be a flavourless white rum or a spiced Rum. It has taken a long time to say no to those requests and develop the Rums we want to sell. We were fortunate to meet Neil Mathieson of importers Eaux de Vie (now Marussia) who would take a rum like Doorly’s XO and bring it to the best bars. Likewise, many years later we have been fortunate to meet Luca Gargano who allowed us to offer another level of Rums in particular cask strength with target distribution to an audience that appreciates this style.

Please could you describe a typical day in your working life?
In the morning it is emails at my desk and the afternoons are spent on the floor either in the distillery or the bottling. At the distillery, more or less each day I taste current production, all batches that have been casked and all that have been dumped and vatted ready to go to bottling. The bottling team tastes each bottled batch of the core brands so I don’t normally get involved in that except of course the Exceptional Cask Series or the Velier releases. I am more distiller than blender. My team are the blenders. Each day has a plant walk through, where I go through checking the operation. We have a lot of instrumentation but the walk through is where you get hands on as well as eyes on. In crop season this now also includes the cane milling and juice fermentation.

What are you most proud of out of all of your Rum achievements so far?
Winning the IWSC Rum Trophy with Foursquare 2006, the first Rum we produced with Luca was pretty special. There was about 230 entries. Likewise, winning the ISC Supreme Trophy for Foursquare 2005 from about 1,600 entries was also pretty special, the first Rum ever to achieve it.

I am proud as well that we have maintained the integrity of our Rums over these years. It would have been so easy at the start to just add sugar and essences to young Rum and boost sales and win acclaim among ordinary consumers and medals from junk competitions. I am proud that we stand or fall on honest Rum. I am proud that we have acclaim from the people I respect and admire the most. It means a lot to me to have the respect from people like Sukhinder and Luca.

What is the hardest thing about producing Rum at the moment?
Having to deal with dishonest people.

What is the best thing about producing Rum at the moment?
Working with good people. I have become close with several people in the rum community.

There seems to be endless possibilities from ageing in different woods, blending and releasing expressions at different ABVs. Are there things you know would not work and are there things you want to try?
Yes, the possibilities are endless and that is just within oak. There are 600 species, you can toast or char it in a myriad of ways. You can use it air seasoned or season the oak itself with everything from spirits like whisky or brandy to still wines, sweet wines or fortified wines. You can use 200 to 700 litre casks. It is for these reasons that I do not believe in going outside oak. It is gimmicky and a marketing strategy. Oak is the perfect balance, hard enough to be watertight, soft enough to interact with the spirit. There is a reason why 95%+ of wines and spirits use oak. I want to make the best Rum and so that is why I stay within it. If marketing was more important I am sure I would try some gimmick. We should also avoid Brazilian woods because they are endangered. They are very hard though, so finishing in them is truly just marketing.

I am actually very conservative, I use many different casks but if you really look carefully you will see I am very conservative. I am not very brave, I only use casks where it is a certainty that they will work well.

Which Rums do you enjoy drinking at the moment?
Of mine? 2007. Outside of mine, Worthy Park 12. Hampden LROK.

Are there any new projects you can tell us about and what should we look out for from your distillery in the near future?
We have a second sugar mill coming so we are going to be making more Rum directly from sugar cane juice in the coming year. It will be more visible during crop season and in years to come we should have some very interesting Rums to offer.

Bottle kill on another twist from the Cuban Cockta

Starting the evening with a Cuban Mai Tai featured

Decided it was finally time to pick my Limes. Only

Time to open this gift from close friends who know