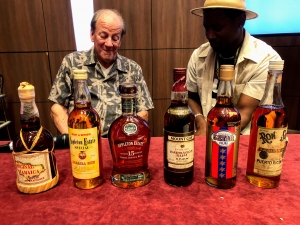 It’s not everyday that you get to try Rare rums but during this years UK Rumfest we did just that! We were lucky enough to try 7 Rums which combined had a total value of over £4000 but it was not the value that made it special. A few years ago we met Steve ‘Professor’ Remsberg at Rumfest and we were in awe of his knowledge and collection of 1600 bottles of Rum (with approximately 400 open bottles). This year we had the pleasure of listening to him discuss some of the bottles in his collection which he had very kindly brought over from New Orleans for us to try. Ian Burell, founder of the Rumfest joined him to lead this amazing masterclass.

We started with a Rum from the late 1940’s to 50’s called Original Jamaica Rhum Di Fantasia, sometimes seen with Black Joe on the label. This has an Abv of 43% and can be found online at auction for approx £60. There was little detailed information about this but what an experience to taste something from the 1940’s!

Next up was the Appleton Estate Special Wray and Nephew Abv 43% which was valued at £150. Steve recounted stories of when he first tried this Rum and the lengths he went to, to buy this with it not easily being available in the US.

The third was a more recent bottling from the Appleton Estate which is a blended Rum of 15 years (youngest rum 15 years).This is not going to be sold in the UK and will only be available in Canada so thanks to the ‘Rum Runner’ that brought this over. This has an Abv of 43% and retails at £60.

The fourth was probably my favourite of the session which was a Mount Gay Extra Old from the late 1970’s.

I would love to put this next to the current bottling’s but feel this would win in a taste off hands down. It just had something so balanced that made it incredibly enjoyable. This was valued at £250. 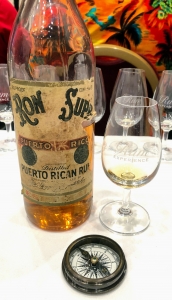 The 6th Rum was particularly special, Ron Superior Puerto Rico (sherry cask) Abv 40% as it was the last bottle of this particular Rum that Steve had in his collection. At the time of discovery he bought as much as he could and even enlisted friends and family to find it. To me this is a truly rare Rum. It was valued at £500 but to me it was priceless. 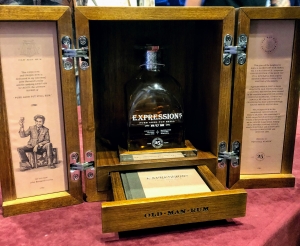 Old man expressions which is a blend of seven Rums from Barbados, Guyana and Jamaica.

The youngest rum in the blend is 25 years – the remaining six rums range from 26 to 33 years of age. This is available for £3,750.00! As I said earlier, this was not about the value in money but the value in history and knowledge of the people in the room. What an experience and one Steve hinted may happen every year.  Let’s hope so!

There has been a problem with your Instagram Feed.
Error: No posts found.